i know about these things*

sometimes after admitting i know nearly nothing about a subject, i like to go ahead and talk about it at length just to see what i can come up with. for example, here's a fantasy football team ted & i developed based on what i know about fantasy football: 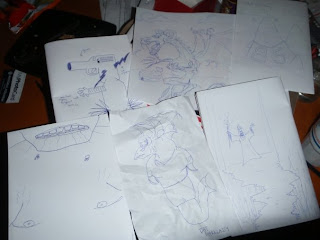 this morning i realized i know SHOCKINGLY little about the beatles. so let me tell you about the beatles. they were a band in the 60s (the 1960s) who may have been the first band to fly across the ocean because i know when they got off that plane it was kind of a big deal.

other than that, there were like 4 or 5 members, i'm not really sure, i think originally 5 but whenever someone died there'd be 4 for awhile until they found a replacement. so there was ringo starr, he played the drums, and john hamilton (sp?), and i don't remember the rest. john, he dated this girl named yoko ono and they just slept a lot, i think yoko had mono or something.

anyway i also heard that yoko was the reason the band broke up, because she REALLY liked pizza so everywhere the band toured she'd be like "ooh let's go get pizza!" and the rest of the guys kinda started to get tired of it, they'd be like "hey how about we try this chinese restaurant, i read a good review on yelp" (which was a newspaper at the time -- no internet, remember). but yoko would just say "nooooo i want piiiiiiizzaaaaaa!" and they would give in. she was pretty pushy i guess. well after like 3 years of eating pizza straight, these guys couldn't take it anymore and they quit the band. one of them -- i think it was bill -- even said "this pizza's going to be the death of me!" in a british accent and boy he couldn't have been more right! tragic, really.

so after the beatles broke up the ones who were still alive just went and did their own things: ringo is a painter, yoko works for PETA, etc. lots of people still listen to the beatles, even people who weren't alive in the 60s, which makes me think they must've been pretty special.

and that's what i know about the beatles.

and LA record lets you review music, right? who you sleeping with?

Them psychedelic boys were purdy good.