cats on the internet: for education!

ok so you guys know how the internet started because cat owners needed a way to share photos and videos of their cats worldwide? well i'll tell you one good thing that has come from the internet: instant cat knowledge.

i've been worried about my cats lately because i saw this big, flesh-colored cat lurking in the trees outside my house -- what kind of cat is flesh-colored? he's not white and not orange, but somewhere in between, but not in a pretty way, just a fleshy way. and the look on his face... you can just tell he's up to something, and that something is not helping old lady cats cross the street. or maybe he is, but while he's doing it he's yoinking their old lady cat wallets out of their purses, which is even more evil than not helping them in the first place. i also saw him sitting right outside my cats' cat door when i came home the other day. i don't know if he's some hooligan friend of theirs or just waiting to beat them up, but either way, i don't like him.

so anyway, last night i was petting dodger, scratching his chin, when i noticed these brown spots all over his lips! i'd never seen them before, but i guess i hadn't looked in awhile, but i know i would've noticed them before if they were there. so i thought oh my gosh, what is going on?? has dodger been out there smoking so many cat cigarettes that he now has oral cat cancer?! where would he get cat cigarettes? lurky cat, of course! or -- gasp! is this some sort of cat STD?!? that dirty, fleshy, lurky cat! he WOULD have an STD. what am i going to doooo oh noooo my poor kitty : ((((((

so i googled it, and after the first couple pages of "OMG YOUR CAT HAZ DEATH DIZEAZ PLZ TAKE IT TO THE EMERGENCY DOCTOR VETZ RITE NOW OMGponies!!!!1!", i found a series of reputable sites that let me know orange cats get freckles on their lips with age, and it's nothing to worry about. 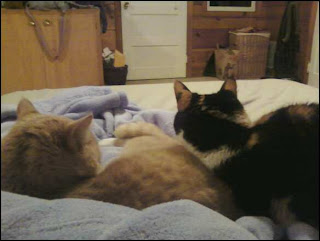 I like how they are both pretending to not notice you. Sneaky kitties.