Yesterday while google mapping the drive time between my apartment and my local Taco Bell, I noticed something strange: Some Taco Bells had 3-star ratings while others had only 2.5. Curious as to what might account for such a discrepancy, I decided to investigate.

This post marks the first in a new series on ambericaonline: Taco Bells of Portland, in which I work my way through all the Taco Bells in the city of Portland in a quest to determine the warm, beany truth: Are some Taco Bells better than others?

Tune in for reviews of my Taco Bell experiences every... week? No that's gross. Just every time I feel like eating Taco Bell. It's more often than you think.

I will order the same meal* at each Taco Bell and comment on the following:
*This part will be easy as I've been eating the same meal at Taco Bell for over a decade now. It used to be combo #2** -- Grilled Stuft Burrito with beef, side of chips & cheese, and a medium soda -- but in 2012 they revamped their menu and turned the GSB into a GSB XXL (now featuring guacamole and "avocado ranch"?? no.) and replacing the chips & cheese with a taco. Big mistake as far as I'm concerned, but I don't make the decisions at Taco Bell, unfortunately. So now I have to order the Grilled Stuft Burrito with beef, NO guacamole or avocado ranch, with a side of chips & cheese and a small soda because medium is just excessive. Normally I'll get a Pepsi but sometimes I might be feeling a little frisky and order a Dr. Pepper. The soda will not be factored into my review.

ON TO THE REVIEW!

This is my "home" Taco Bell. It's technically not the closest one, but it's the most convenient and holds a special place in my heart as the first Taco Bell I ever visited in Portland. I've probably been to this one the most times out of all the PTBs (Portland Taco Bells).

I meant to take a photo of myself in the drive-thru, but there was no one else in line (6pm on a Monday), and I'm not exaggerating when I say I was in and out of there in less than a minute. HOW DO THEY MAKE IT SO FAST?! I'll tell you how: All their ingredients are in caulk guns. They literally shoot the contents of your burrito into a tortilla, fold it up, and throw it in a bag that someone else has already added the chips & cheese to and voila: dinner.

Anyway I'll get a photo at the next one.

Service-wise, this Taco Bell can't be beat. They ask how you're doing, and if you respond "Good, thanks! How are you?" they always thank you for asking. Of course I asked! Just because you're the server and I the servee doesn't mean your well-being doesn't matter to me. It does. I care. And I'll have the Grilled Stuft Burrito with NO avocado ranch.

Driving home with a bag full of Taco Bell is always a fun experience for me. I WANT to wait til I get home to eat it, but I just don't think it's possible. As soon as I hit a red light that cheese cup's open. This trip was particularly exciting as I got stuck behind a train! I was able to unwrap my burrito and take those first few ultra-salty bites in total peace in the car (where I believe Taco Bell tastes best).

I have to admit I didn't take completely thorough mental notes of those first few bites because there was a very drunk man who, once he saw the train coming, RAN to the edge of the tracks and I think we all worried for a minute there that he was going to do something dramatic and final, but instead he just swayed back and forth looking at all the train cars. I did get a picture of him: 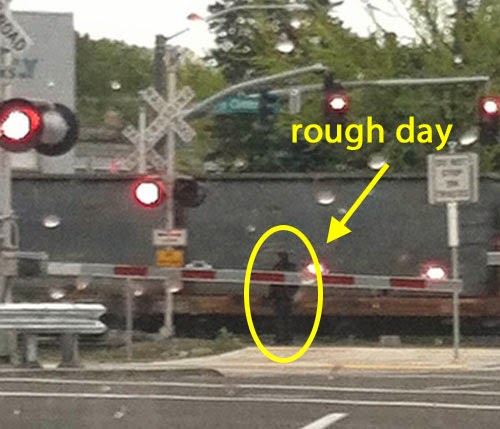 Anyway, by the time I got home I was about 1/4 of the way done and so far so good. One of the challenges with burritos -- and this is anywhere, not just Taco Bell -- is ingredient uniformity. I understand it, I experience it myself making tortilla-wrapped items! So I don't judge too harshly. With Taco Bell, it's kind of expected that I'll have to turn my burrito upside-down about halfway through and start eating from the other end in order to get the beans/rice/meat/whatever's missing from the first half. No points off for that.

This burrito: alright! There was one cilantro twig in there that was a bit of a shock, but I'll always welcome more greens in my Taco Bell. Gotta eat healthy, right? I finished most of my burrito. 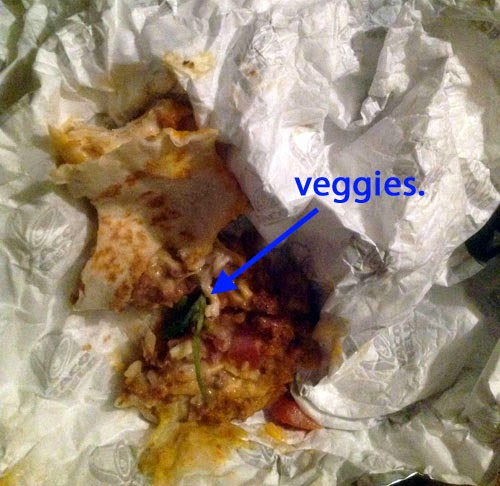 The chips were fresh and plentiful, and the cheese warm and thick. One time (not in Portland) I got served a half-cup of watered-down nacho cheese and that was not acceptable. 1 star for that Taco Bell. I don't care where you have to cut costs, it better not be in my cheese. Like I wouldn't notice!

A few swigs of some ice-cold Dr. Pepper (feelin' frisky!) and I'd finished my meal.

Portland's rating: 2.3 stars (I'll always link to the reviews here so you can read them yourself -- scroll down to view them all. They're a hoot.)


Correction: This post originally incorrectly identified the location of this Taco Bell at SE 52nd & Powell. Listen, I'm a burrito person, not a maps person alright?