First, thank you all for waiting so patiently for this next installment of Taco Bells of Portland. I've been busy and out-of-town. Actually, I went to this Taco Bell a week ago today and am just now getting around to blogging about it. I took excellent mental notes, though (memories like this just don't fade).

Secondly, some of you may have seen recent rumors that the Taco Bell on Burnside -- the Taco Bell featured in my very last blog post -- had closed. While this Taco Bell only got a 2-star ambericaonline rating, I never would have wished for its closing, only its improvement. So you'll all be as relieved as I was to find out that that's indeed what's happening! It's getting a fancy new redesign, and hopefully with it a new standard in burrito assembly. Was my blog post responsible? Was one of my literally DOZENS of blog hits from Taco Bell HQ? I'll never know. But I will say so anyway. Follow your dreams, folks. Things will happen and then you can attribute it to you following your dreams. 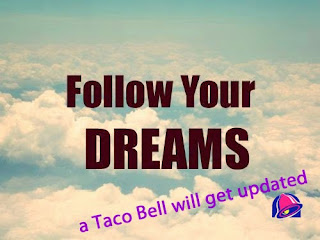 OK! Onto the review!

Like I said it took me awhile to get to my third Taco Bell. There were many times I wanted to make a run for the border, but I kept getting sidetracked and started to wonder if it would ever happen. Until last Saturday when I had to hit the DEQ to renew my tags, passing by... you guessed it! Taco Bell. Just goes to show: The universe will provide.

This was my Taco Bell when I lived in North Portland and I knew I was in for a treat because it had never let me down. As usual I zipped in and out of the drive thru in just a couple minutes, and this time got my food for a reasonable $6.77 (friendly smiles included!). This drive thru exits one-way onto the street too -- like the Burnside one -- but for some reason I don't find it annoying here. Besides, I figured I'd have plenty of time to eat waiting in line at the DEQ. 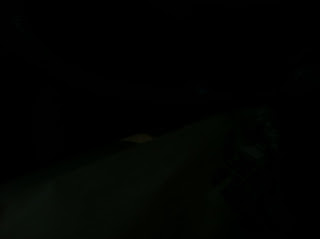 Here's the picture I took of this Taco Bell, which is actually of the inside of my purse. You see my phone is so slow, I can snap a pic, place my phone back in my purse, and then seconds later the image is captured. I need a new phone if I'm going to call myself a Taco Bell journalist, which I am. Did you know they'll let you put anything on business cards these days?

Well I got to the DEQ at noon on a Saturday and to my surprise there was only one car in line ahead of me. I crawled forward to the booth while taking the first few bites of my Grilled Stuft Burrito and attempting to take a photo of it but instead taking a video (another cool trick my phone does):


If anyone ever needs a video of a burrito, you're welcome.

Anyway what you'll notice about this particular specimen is the careful, almost precise distribution of ingredients. Look at that color, that texture. 'Tis a thing of beauty. Beefy, beany beauty. 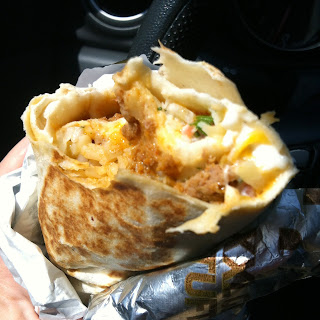 I can't say for sure, but this may have been the first GSB in over 10 years of eating GSBs that I didn't have to "seek the beans" as I like to put it (flip it over). I ate this bad boy top to bottom, enjoying every flavorful bite the way god intended. The chips & cheese? Perfect. The Pepsi? Definitely a Pepsi. And the DEQ? Piece of cake. Or shall I say... piece of burrito?*

After the last one, I couldn't have asked for a better Taco Bell experience. This Taco Bell has renewed my faith in Taco Bells. Other Taco Bells would be wise to follow suit. Maybe invite the manager of this Taco Bell to speak at the next Taco Bell conference, which is a fantasy I didn't even know I had until I typed it out just now. Thank you Taco Bell for your many gifts.