Taco Bells of Iceland: #1 (on the way to the Reykjavik airport)

That's right, my friends! Your favorite series where I review local Taco Bells is back, and this time it's "betra" than ever: because it's from Iceland!

When I told people I was going to Iceland they said, "Try the whale blubber!" "Eat a puffin!" "If you hold your nose the fermented shark isn't that bad!" And to that I said: "Nei takk."

Let me back up: Iceland is a magical place. My first full day there I saw five rainbows. FIVE -- two of which were a double rainbow, and one beamed right down onto a waterfall. I soaked in two natural hot springs right out there in nature. I sat in a sauna powered by a GEYSER. Like, I get why all Icelanders are musicians and artists. Just look at this place! 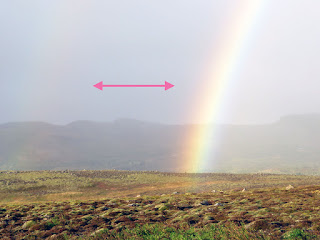 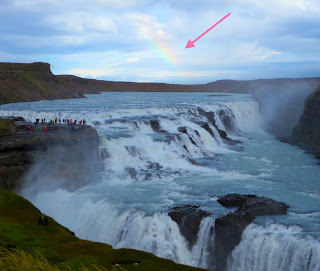 So it was almost no surprise to me when I saw a Taco Bell on the way to the airport. I'd been so blessed already, it just made sense. And I'd left with plenty of time for a side of adventure.

When I pulled up, I had to make sure they actually had my meal -- Grilled Stuft Burrito with beef, no guacamole or avocado ranch, side of nachos and a small Pepsi. The Reykjavik Taco Bell has a limited menu, but that's probably because they know what works and what's a waste of time. The GSB combo was T6 -- the last combo. I breathed a sigh of relief and ordered a T6. 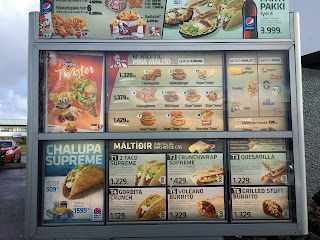 "Do you want the menu?" The intercom woman asked.

"No, I can see it, thanks! I'll just have the Grilled Stuft Burrito combo please," I replied.

"The menu?" She persisted.

"The burrito with the nachos and Pepsi?" I asked.

We'd had a breakthrough. "Menu" is Icelandic for "combo!" Culture. Learning. Sharing. This is what travel is all about, folks.

So I ordered the GSB menu and pulled forward to the window, which turned out to be a surprise and a delight. Now, in addition to being magical, Iceland is really windy. Like the windiest place I've ever been -- I almost fell over trying to take a selfie in front of a different waterfall. How do you exchange money for food in such wind, you might be asking. Well my friend, these industrious islanders solved that problem long ago. Check out this window system: 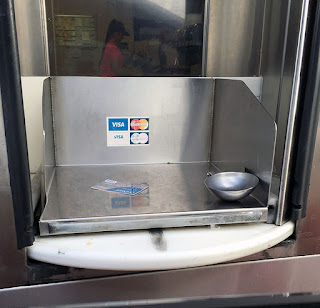 You're supposed to strap your money in (I just laid it down, like a tourist) and it swivels around to the indoors, and they do the same with your food and swivel it back out to you! Ingenuity. Art. Burritos.

The meal cost me 1,329 kr, which is about $10 which yes, is the most I've ever paid for the GSB combo. But I wasn't about to skip out on the chance to eat my favorite meal in my favorite place just to save $3.

I pulled into a parking spot and took a bite. So...

Imagine if a bad guy broke into your house and held a gun to your head and said "Make me a burrito!" and you're like "Oh gosh, do I even have all the ingredients for a burrito??" But he doesn't care, he's a bad guy and he's HUNGRY. So you pull out some kind-of stale tortillas, some ground beef, and a bag of Mexican cheese you have leftover from a party for some reason. You microwave all that, then put it on the stove for a second for that authentic grilled effect. You feed it to the bad guy, praying he'll accept the dry, tasteless disaster you just served him as an actual burrito.

Listen, it wasn't good. But if I'm the bad guy in this situation, I accept it and I don't shoot anyone in the head. These guys are on a tiny island in the arctic reaches of the globe -- they don't have access to the same fresh, delicious ingredients you and I do here in America! Was it the worst GSB I've ever had by a long shot? Absolutely. Do I regret any part of this experience? Get out of my face for even asking.

As far as the rest of the menu was concerned, the chips were way too salty, but it's good to know that nacho cheese and Pepsi are the same across the globe. If you ever need to taste the comforts of home, just get yourself a little plastic cup of bright orange cheese goo. Like milk from a mother's teat.

In the end, I learned that what Iceland lacks in Mexican seasoning, it makes up for in natural beauty. It may not have soft tortillas, but it does have a special place in my heart. It may not be able to make a burrito to save its life, but it should stay alive for other reasons, like geysers, and puffins, and that really cool window contraption. Ég elska Ísland. 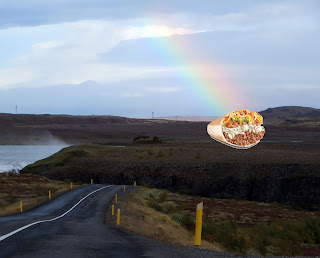