You want the shiniest lawn and most luxurious hedges. Now you know.

And at $19.99 per bottle, you won't find a better deal anywhere else! You sit and think about that while you wait.

My pappy used to say I'd never make anything of myself. Well don't look now but my name is on several bottles.

You can look now.

I also know a guy who will do a "Brazilian Blowout" on your trees if you'll let him. I have some of his business cards and can get more at any time.

Amber's Lawn Soaps and Hedge Balm: Are you ready for it?

sometimes i think texting is the worst thing that's ever happened to us, and other times i write emoji poetry. 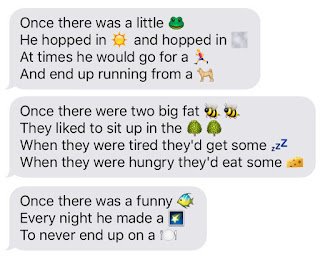 yes i had two cocktails and i walked home and boy do i feel like blogging!

just let me say: the best i ever feel is spending time with funny, powerful women. are they women who know exactly what they want? HELL NAW. they know things -- plenty of things -- and then they're like "omg i do not know some things." and that's what i love about women. they're comfortable uncomfortable. it's where we live. it's no big deal.

here's what i think: rich white men have been in power for EVER. ever ever. WHAT IF, just as an experiment, women were in power? like women of color. or gay or trans women. or women in poverty. or non-able-bodied women, or women with mental health challenges. like i'm a woman but i have no IDEA how bad it is for some other women. what if we let those women make all the decisions for just 100 years? just 100 years! it's nothing! grand scheme of things.

I BET, in 100 years we would see a more equitable and more peaceful world. (i bet we would see it in 20 years but let's really solidify it and give it 100. you'll be fine! don't worry!)

i mean why not try it? we've tried this ONE THING for so long and... i have to say... like it's OK but it's not super great. there are a lot of things i would change.

i bet, i bet you could replace all the wealthy white men in power -- from presidents to shift supervisors -- with underprivileged women -- even just a random sampling of underprivileged women with no political or leadership experience whatsoever -- and things would get better. i bet they would!! let's find out. why not!!? i love new things.

ideally, we'll all live in a world where opportunity is equally afforded to all, and individually we can make of it what we will. to get there, i wonder if we don't need to take away some of the privilege the most privileged have experienced in order to get them to understand. in order to get us to understand. like ideally we can skip that part, but realistically, i wonder if we don't need to swing a little further in the opposite direction in order for things to eventually balance out. 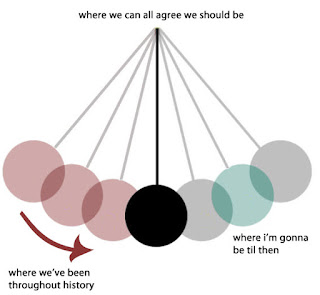 for example, white people be like "black people should not riot! that's so rude!" ok but we created a system in which black people have far less agency. so to ask them to protest within that system is like asking a person without arms to raise their hand to ask a question. i think disadvantaged people need to make a BIG F-ING DEAL in order to just get our attention -- even if it looks messy and makes us feel uncomfortable. that's good. let's start there, and then let's find a place that works for everyone. but if in the meantime i need to let go of my privilege... well ok. i've had it long enough. i can live without it for a bit just like some people have lived without it ever. like this is me talking about feminism where i should have every right to be like "MY TURN!" but already i'm like nah this is someone else's turn (which is what happens when you read about white feminism i think).

white feminism is when you march up and down the street chanting "77 cents on the dollar! 77 cents on the dollar!" while women of color stand behind you going "uh try 65 cents or less." it's demanding a list of things without ever turning to ask "hey does this list work for you? what are your priorities?" a good white feminist stands in spaces where women of color would be ignored and goes "LISTEN UP, you bozos!" and hands over the bullhorn, or continues to yell on their behalf if that's what'll get the point across best.

ANYWAY, this is all to say i love lora and brenna and christina and kenzie and jessie and charlotte and gabby and chiara and nicole and linzi and jess and stef and jenna and stacey and baby sara and megan and emily and marta and laura and elizabeth and tricia and mo and my mom and grandmas and my cousins and my cousins' wives and THAT IS JUST THE BEGINNING of women i love, don't even get me started on my book club or my coworkers. (there are a dozen other names but these are the people whom i've texted or had happy hour with most recently. sup brenna & christina... thanks for buying those nachos.)

i mean damn, do you guys even HAVE this? 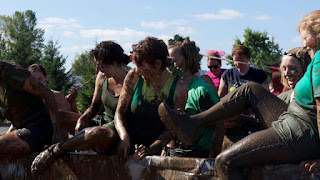 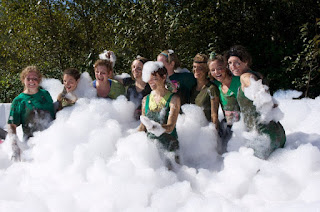 did you guys even plan a costumed fun run with all your guy friends and name yourselves The Gynosaurs? alright.

my version of feminism is i love everyone, but i love women mostly. and i believe that brand of feminism needs to exist right now in order for things to even out someday. so deal.


*future generations, when you find this post hundreds of years from now, know that ;-* represented a winky kissy face, in like old hieroglyphic style. also i hope everyone's got the same opportunities.