Alright, time to switch it up on here. It's another installment of Buttwipes of Portland! ::cheers, applause, someone coughing:: 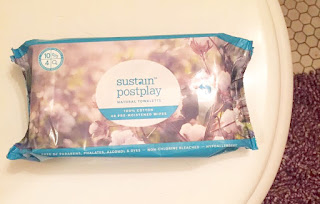 I gotta say, I've been thrown for a loop with this one. I thought I was buying just another bag of buttwipes -- they came from the buttwipe section alongside all the other buttwipes -- but apparently I purchased a revolutionary new tool for solving a universal problem! I didn't know this when I bought them, and I haven't known it for the past month while using them, but I found out today when I googled them! (Caution: Only google them if you want to read a lot of people talking about sex but replacing the word "sex" with "play." ::shudder, another cough::)

Seriously I've just been using these to wet my whistle if you will, as part of my daily routine, and I thought like the last ones (Swipes Lovin' Wipes) the company just added a layer of marketing to let you know hey, you can also use these for post-sex cleanup. But no, these are specifically for post-sex cleanup! I mean they say it pretty clearly on the packaging but with all the cutesy plays on words, I just didn't believe them. Are people straight up storing these next to their beds and not on the backs of their toilets? Because I would argue that the only difference between these "post-play wipes" and buttwipes is where you store them. 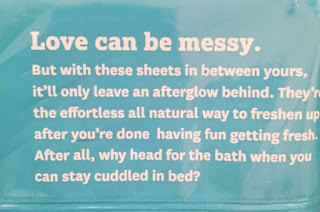 Therefore I will continue my review of these BUTTWIPES. First, I don't remember how much they cost but it was under $5 for 48. You can buy them directly from the Sustain website for $10.99 per package if there's no New Seasons or Whole Foods in your area and if you think eleven dollars is a reasonable amount of money to spend on BUTTWIPES. Up to you.

So cost, whatever -- normal. The scent is mild and pleasant, like opening a window. One nice feature is 10% of the profits go to women somehow! That's what this little symbol tells me. 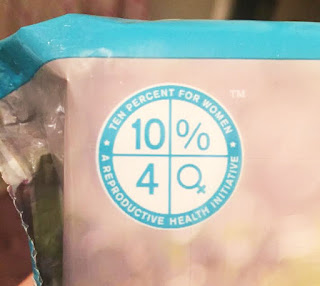 They are also made out of cotton instead of paper pulp, making them more durable. Personally I've not had an issue with the durability of my paper pulp wipes, but then again I'm quite a delicate lady. They're also free of bad stuff and full of good stuff instead, but that's kind of a given in this series.

But by far the best thing going for these wipes is the texture. Remember how everyone was satisfied with pancakes until waffles came along?? Total game-changer, and on that front I will agree these wipes are revolutionizing the industry. Without spelling it out, there are reasons why waffles are better than pancakes, and these wipes are waffles for your butt. 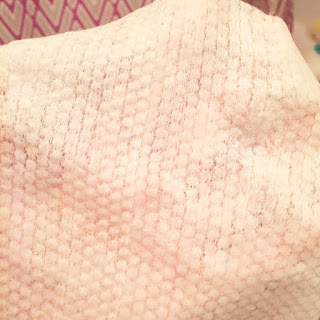 Major, MAJOR con though: They're not flushable. Honestly I would not normally buy a non-flushable wipe, but this is journalism and I wanted to see if I could handle it. I mostly can! And a couple times I forgot they're not flushable and flushed them anyway. Guess what? They went down! Listen I know this is Not Okay™ and I'm trying hard to do better. (I have also heard it's a bad idea to flush any wipes, whether they say flushable or not. I also heard Taco Bell is bad for you???) But IF you're wondering if flushing these ones will cause your toilet to volcanically erupt in your face, it won't. I tested it so you don't have to.

In conclusion, I feel spoiled by these wipes. It's been so lovely, but I don't think they're my wipes. I need a flushable wipe, and I may be willing to give up texture for disposability. (Turns out I might be a pancake girl after all!) I'm also still giving these the side-eye for claiming they serve a very specific purpose... I'm here to tell you they do it all. Just ask my butt.


Helpful information. Fortunate me I found your web site unintentionally, and I'm stunned why this coincidence didn't came about earlier! I bookmarked it. www.gmail.com login

oh i bet you fuckin are, hendrik.

Great Article. Thank you for sharing! Really an awesome post for every one.

IEEE Final Year projects Project Centers in Chennai are consistently sought after. Final Year Students Projects take a shot at them to improve their aptitudes, while specialists like the enjoyment in interfering with innovation. For experts, it's an alternate ball game through and through. Smaller than expected IEEE Final Year project centers ground for all fragments of CSE & IT engineers hoping to assemble. Final Year Project Domains for IT It gives you tips and rules that is progressively critical to consider while choosing any final year project point.